Back in November 2015, YouGov ran a global study looking at attitudes to gender in 24 countries and regions. A lot has happened in the last five and a half years – in the English-speaking world the MeToo movement has put gender issues in the spotlight. But has there been much of a change in attitudes?

Our 2021 version of the study finds mixed results. In the 13 countries and regions to feature in both surveys, some have made progress, some have seen a decline, and others have remained the same.

Topping the list this year is newcomer Spain, with a score of +68. Italy comes second on +65, and the UK third on +64. In fact, the top 10 slots are exclusively occupied by the European countries surveyed, plus the US and Australia.

At the very bottom of the list is Indonesia, with a score of just +17. This score represents a significant decline on 2015, when the Southeast Asian country scored +30. 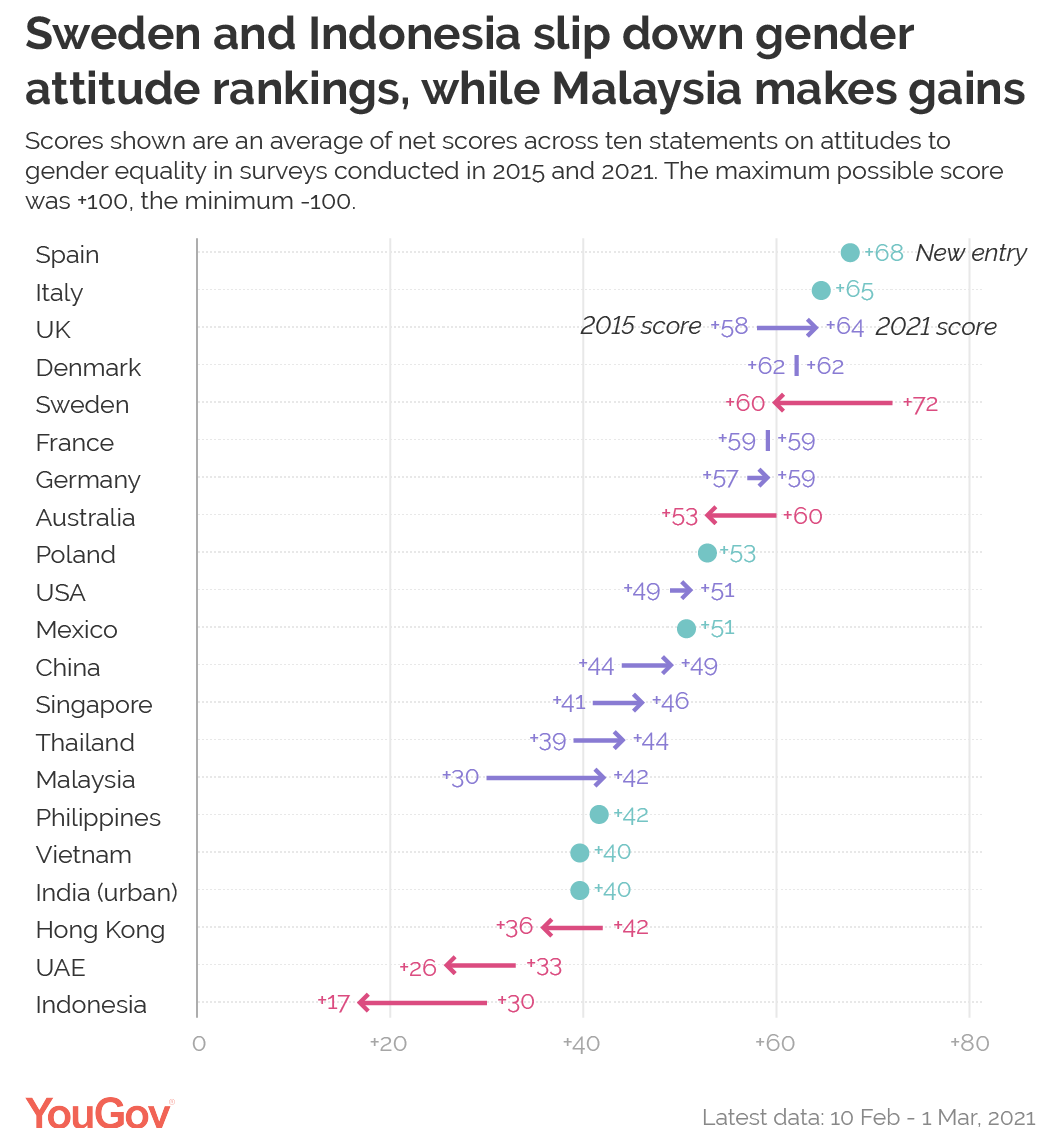 The other big decline has been in Sweden, which actually topped the list in 2015 with a score of +72. This score has since fallen to +60, putting the Nordic nation just behind Denmark, whose score of +62 remains unchanged over the five and a half year interval.

Malaysia is the main success story when it comes to changing attitudes towards gender, having increased from +30 to +42, an improvement twice as large as the next most-improved country (the UK, which is up 6pts).

The national figures disguise significant differences between men and women, however. This gap is widest in China, where attitudes among women score +65, but among men just +37. Likewise, in Indonesia women score +31 on the attitudes scale, compared to only +5 for men. The Eastern nations surveyed tended to have larger gaps than the Western nations, although Poland is an exception, with an 18-point divide separating male and female scores (+43 vs +62). 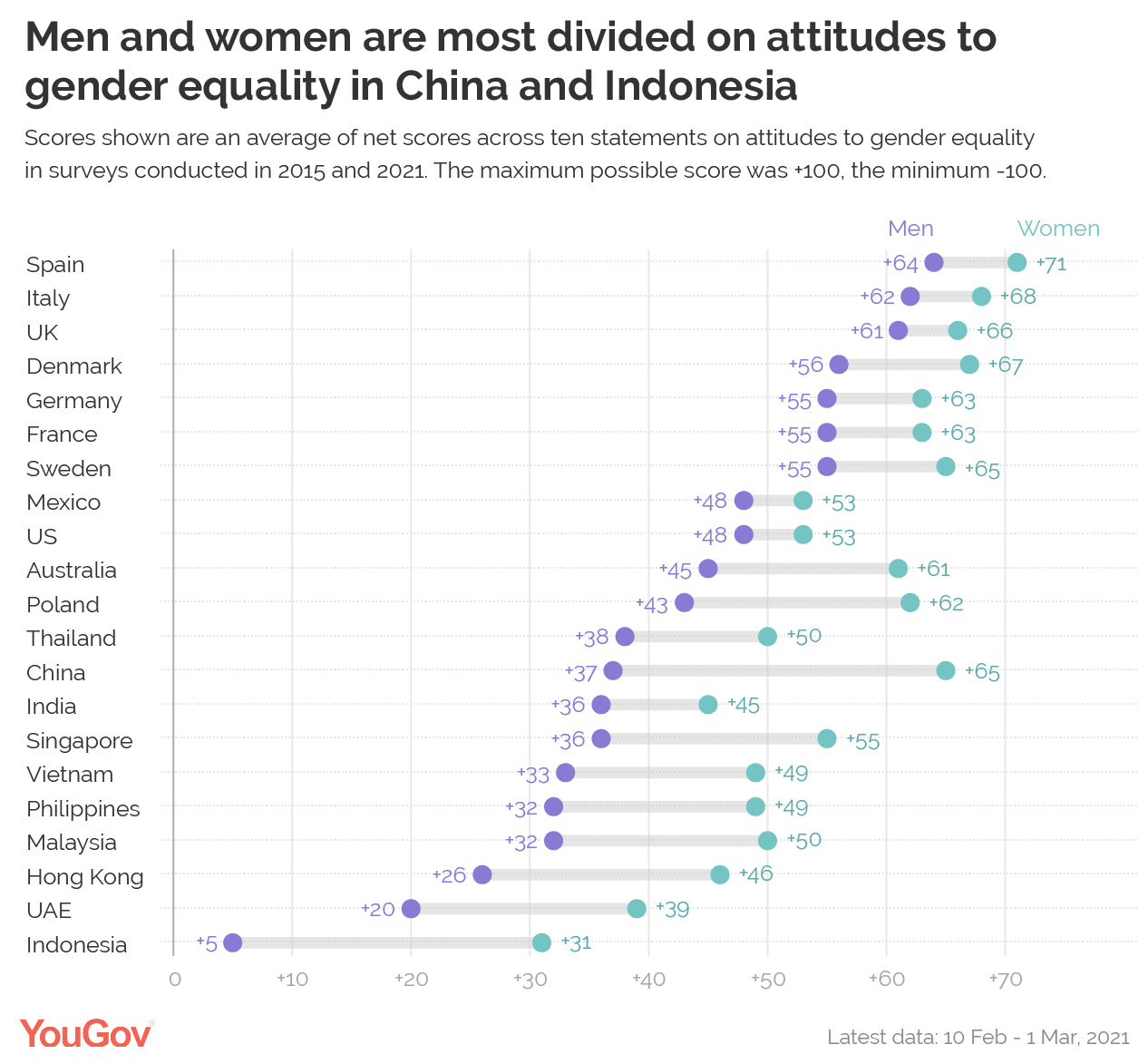 The change in the Indonesia score is primarily due to big shifts in attitudes regarding women and the home. The proportion of Indonesians agreeing with the statement “men should spend more time doing house work” has fallen 22pts, from 56% to 34%. There has also been a 13pt increase in the proportion of Indonesians saying that “a woman’s place is in the home”. These attitudinal shifts have taken place among both men and women.

In Sweden, meanwhile, the largest single change is also regarding housework, with the proportion of Swedes saying men should start picking up after themselves more falling 10pts, from 83% to 73%. Again, this shift has taken place among both genders. Across most of the other statements there are also small shifts away from gender equality, all culminating in Sweden’s 12pt overall score reduction.

In Malaysia, meanwhile, there has been a 16pt increase in the number of people saying that creating more opportunities for women should be a top global concern, up from 66% to 82%. There is also a 9pt increase in agreement with the idea that women overall are an oppressed group, and an 11pt reduction in belief that “It is likely to cause problems if a woman earns more money than her husband”. These, coupled with smaller improvements on the other measures, add up to Malaysia’s 12pt improvement overall.

While the score for both genders has improved over the past half-decade, there are still some sizeable difference in attitudes between British men and women.

For instance, while 82% of women say that men should do an equal amount of housework, only 70% of men say the same (and previous YouGov research has shown that fewer men still actually pull their weight around the home).

There is, nevertheless, agreement between the genders on many of the statements, with near-identical proportions supporting women having careers and equal pay, and very small numbers of both men and women think women should keep quiet, stay home, and serve their husband.