Support for measures governments could take against coronavirus has fallen farther in Europe and America than in Asia.

YouGov has been asking respondents worldwide whether they would support various measures their government could take to try and stymy the spread of the coronavirus.

Support for these policies has long-since peaked in all countries. What is noticeable, however, is how much farther support has fallen among Europeans and Americans than it has among Asians and Australians.

This difference is most noticeable when it comes to closing schools. On average, support for temporarily keeping kids at home has fallen 48 percentage points from its peak in European and American countries, compared to only 20 points in Asia and Australia. 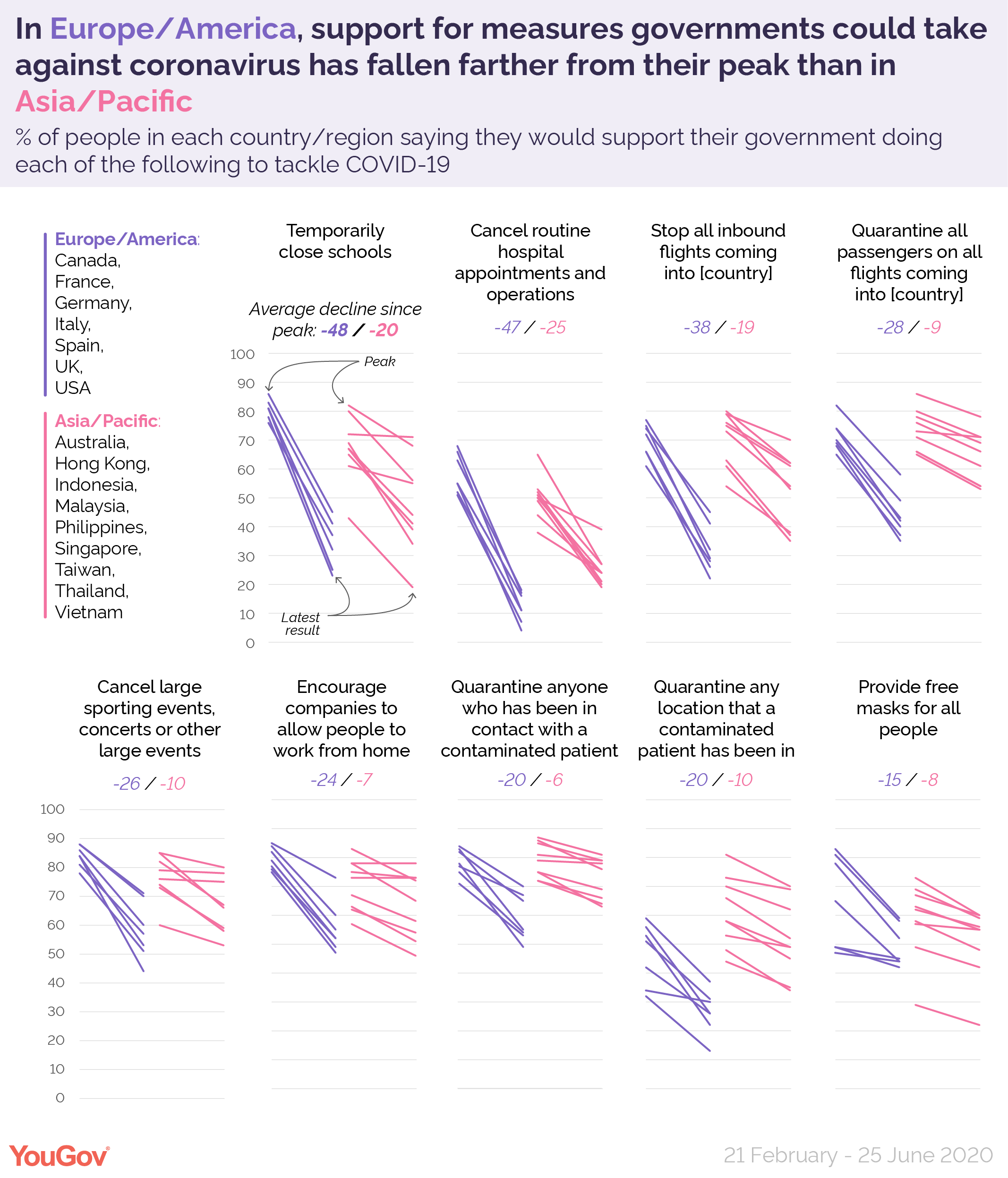 Cancelling routine hospital appointments and operations has also become rapidly less popular in the West (down 47 points on average since peak support) compared to the East (down 25 points).

While it is worth noting that support for these measures peaked later in Asia and Australia, the daily rate of decline has nevertheless been slower than in Europe and America.

Over the last seven weeks YouGov has been asking people whether they believe the coronavirus situation in their own country, as well as globally, is getting better or worse.

What is starting to become visible in some countries is a belief that, nationally at least, the COVID-19 outbreak has run its course. Such a view is still only held by small minorities of people for the time being.

People in Vietnam are the most likely to say the domestic coronavirus outbreak is over, at 16%. There are 13% of people in Thailand who say the same way, and 9% in Taiwan. In China only 4% currently say so, but prior to the Beijing outbreak in mid-June that figure had been as high as 10%. 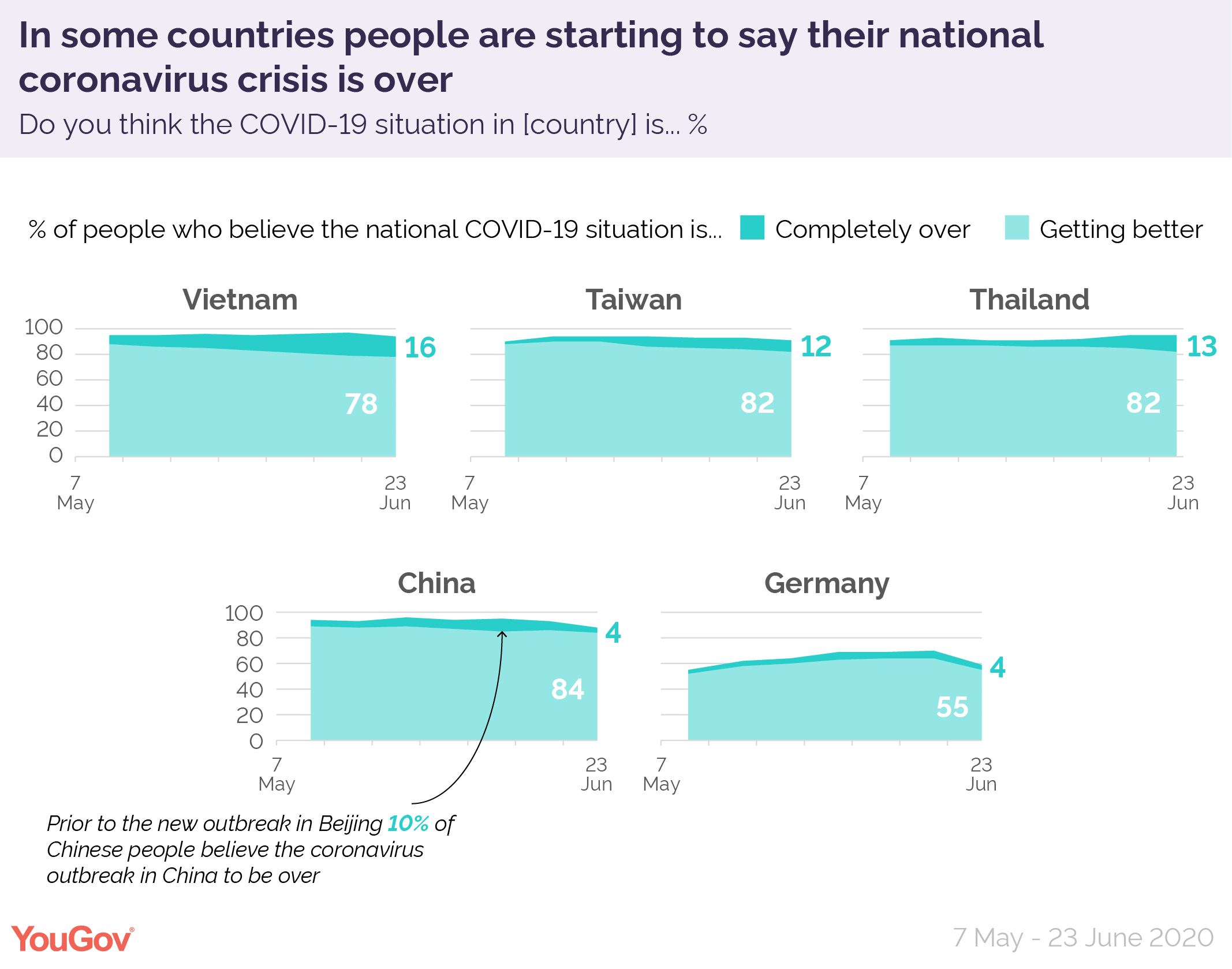 Although only 2% of people in Malaysia say they think coronavirus has been finished off at home, this figure combined with the proportion of people who think the situation is improving is the highest of any country surveyed, at 96%.

Things are looking far less rosy in other countries. In Mexico just 21% think the coronavirus situation is improving or over. With national COVID cases now reaching 500,000, so too do just 23% of Indians.

These figures are likewise 27% in the Philippines, 34% in Poland, 36% in Indonesia and 40% in the USA. Along with Saudi Arabia (rebounding to 49% after having slumped almost 40 percentage points to 41% during a second peak in disease figures), these seven countries are the only ones where fewer than half of people believe the coronavirus crisis is getting better there.

People across the world are far less optimistic that the pandemic is improving on a global level, with the proportion of people who think so in most countries lagging between 14 and 51 percentage points behind the number who think the national situation is improving.

There are a few countries, however, where confidence in the national situation is so low that they are more likely to say the global situation is getting better than the domestic one. These are: Saudi Arabia, the USA, Poland, Indonesia, Mexico, India and the Philippines. 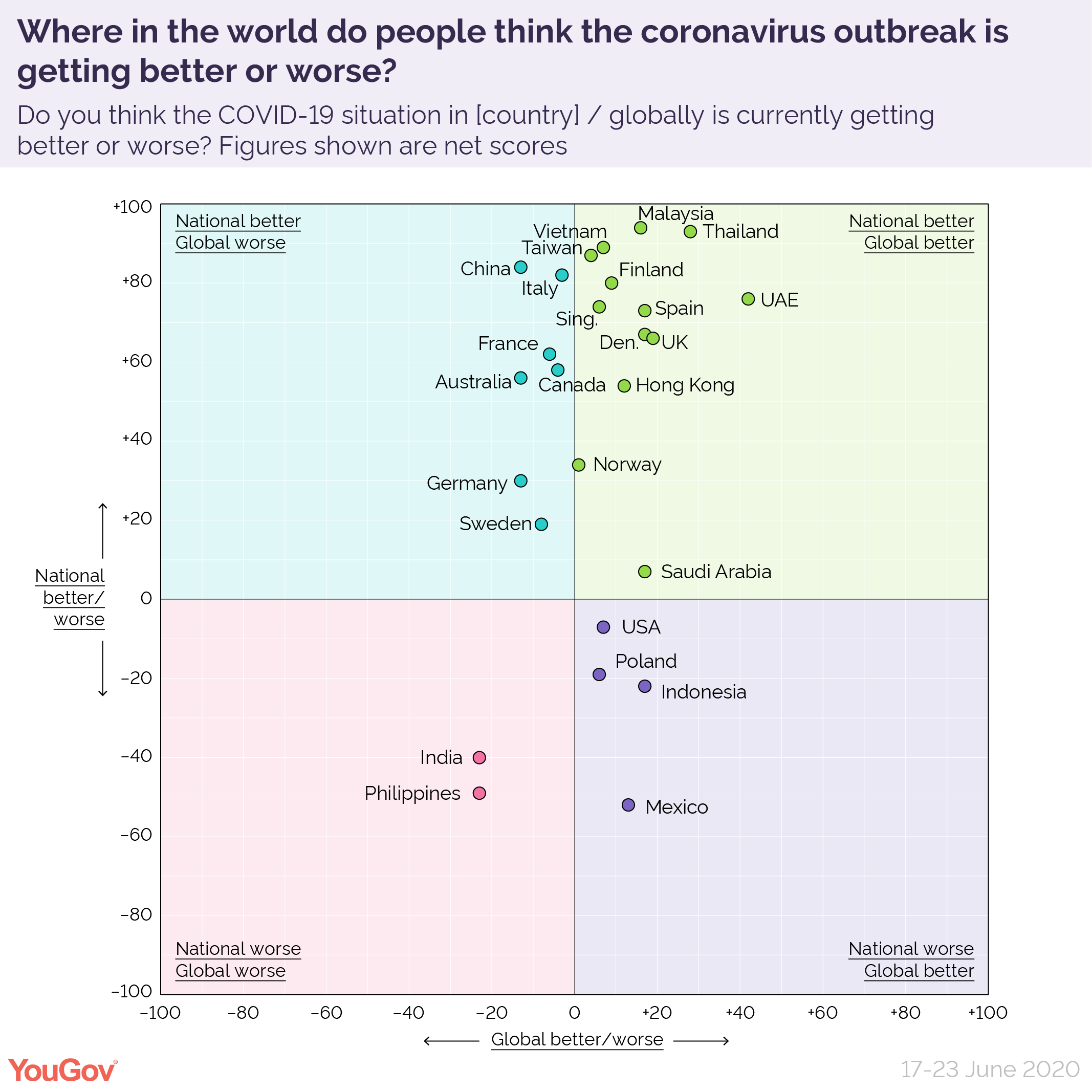 The Mexican government’s approval rating slumps even further this week, falling from a net score of -21 to -32, with only 31% of Mexicans thinking the government has handled the crisis well compared to 63% who think the opposite.

Second from bottom is the Polish government on -18, with most Poles (54%) saying their government has done a bad job managing the national outbreak compared to only 36% who think they’ve done a good job.

Third to fifth places from bottom are occupied by the French (-12), American (-11) and British (-10) governments. In the case of France this represents a noticeable decline since the previous week, when their score had been briefly positive at +2. In the UK, on the other hand, this new score represents an improvement from -18. The US figure is much the same as it had been the week before.

The only other country to hold a negative net score is Sweden, with the -2 net score the first time the government has been held to be doing a bad job by more people than not since mid-March. In the space of just one month the Swedish state has seen its score decline from a relatively healthy +19.

Where government approval isn’t what it should be

Comparing government approval ratings with confidence levels in the state health authorities allows us to identify two types of situation: ones where the government and health service figures move in lockstep, and ones where they don’t.

The latter countries are effectively ones where people believe the healthcare system to have been doing well in spite of the national government. Most notable among these countries are the UK and Spain, where confidence in the health authorities far outstrips that of the government.

Given the trend in the majority of countries, you can argue that the confidence in health authorities figure reflects what the government's approval rating on coronavirus should have been had they not botched their handling of the crisis.

The gap is largest in the UK, where the 40% who think the government is doing a good job when it comes to COVID is less than half the 85% who expressed confidence in the NHS.

The most recent figures also show that while 80% of Spaniards have confidence in the health authorities, just 48% think the government is handling the crisis well – a gap of more than 30 percentage points. 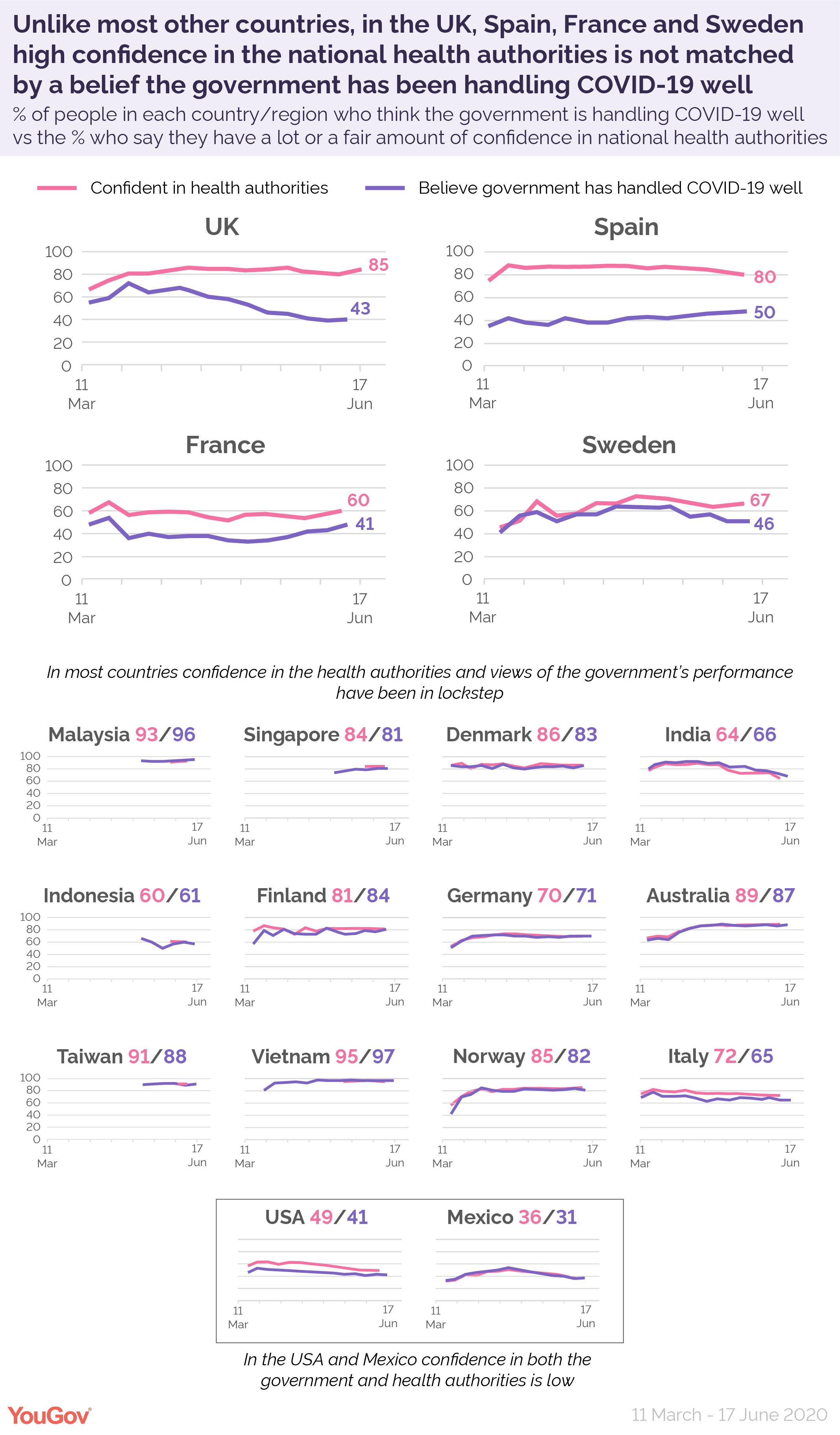 The French and Swedish governments also perform particularly poorly on this measure. While 60% of French people are confident in the healthcare system, only 41% rate the government’s performance. Likewise, while two thirds of Swedes have faith in their healthcare authorities, fewer than half believe the country’s rulers have been doing a good job when it comes to coronavirus.

And in the United States, the 49% of Americans who hold the health authorities in high esteem is only somewhat higher than the 41% who rate the government’s performance well.

The UK continues to be an outlier when it comes to wearing face masks. While the figure is slowly creeping up, less than a third of Britons (31%) say they don a facial covering when they go out in public.

Scandinavians are even more reluctant to wear mask, at 3-7%. Given the number of cases per capita, as well as the level of fear surrounding the virus, the fact that people in these countries - particularly Sweden and Britain - is very unusual. 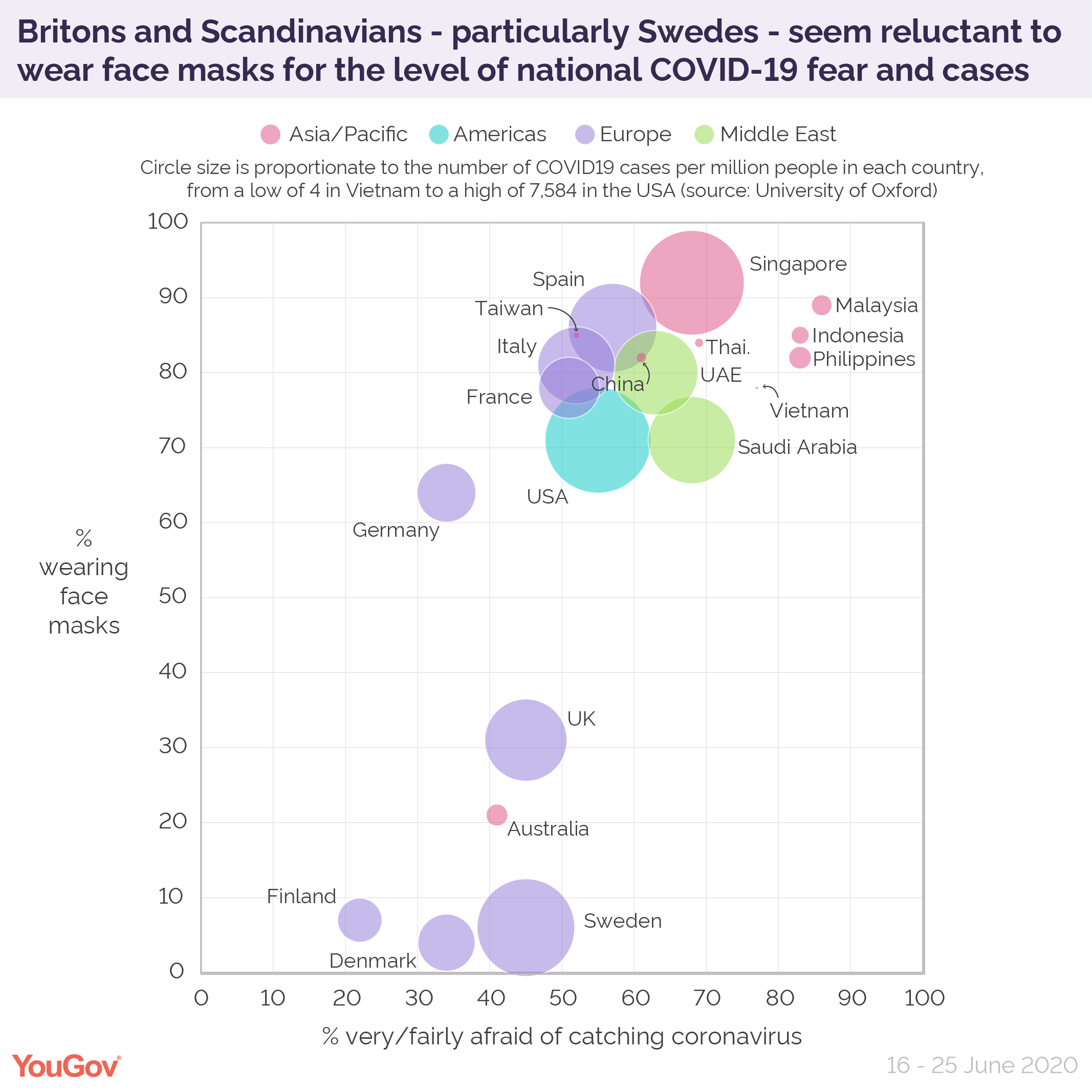 The only other country where this face mask usage is comparably low is Australia, at 21%. However, Australia has experienced far fewer cases of coronavirus per capita, and Australians are far less likely to be scared of catching the disease, so this level of usage is much closer to what you might expect.

What about coronavirus most worries people?

Previous editions of this tracker update have examined people’s coronavirus fears by combining the proportion who say they are very or fairly worried about the impact of the disease in several areas.

This measure generally showed people most likely to be concerned about the damage to society. But what happens when we look at only the results for people who are very worried about each factor? That is to say, what are people most worried about when it comes to coronavirus. 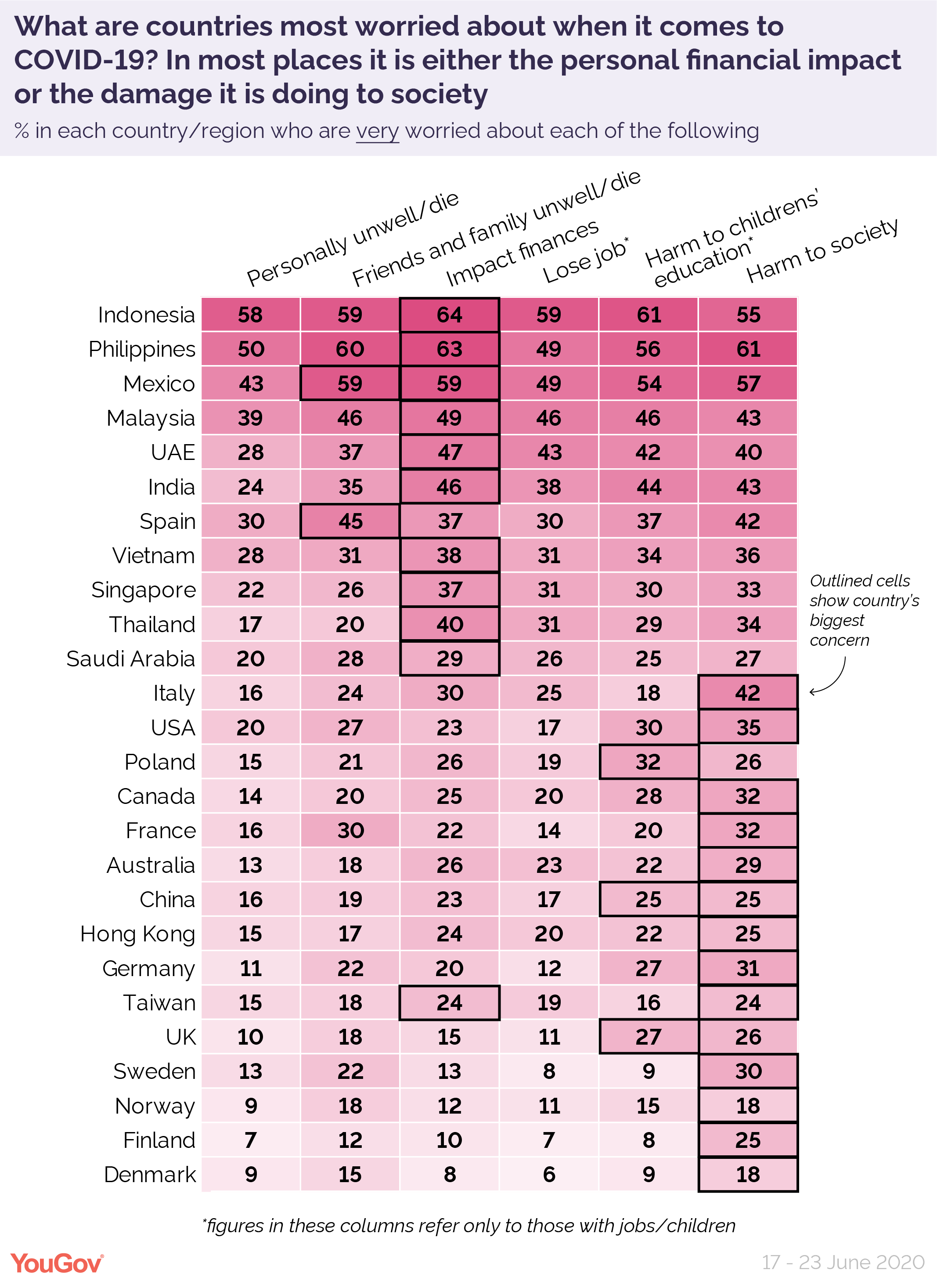 All of the countries where financial concerns top the list of worries are either in Asia or the Middle East. Likewise, the only Asian countries/regions represented in the group most concerned about social upheaval are China, Taiwan and Hong Kong.

Concerns for personal health tend to be near or at the bottom of the list in most countries, the exceptions being Sweden and Denmark.

Understandably, in any given country the proportion of people scared of catching COVID-19 is very similar to the proportion worried of dying or being seriously hurt by the disease. In most countries studied these figures are within eight percentage points of one another.

There are some notable outliers, however. In China, while 61% of people are scared of catching the disease, only 37% are worried about becoming seriously ill or dying from it - a gap of 24 points. Likewise, in Vietnam 77% are afraid of catching COVID, but just 56% fear severe health consequences . 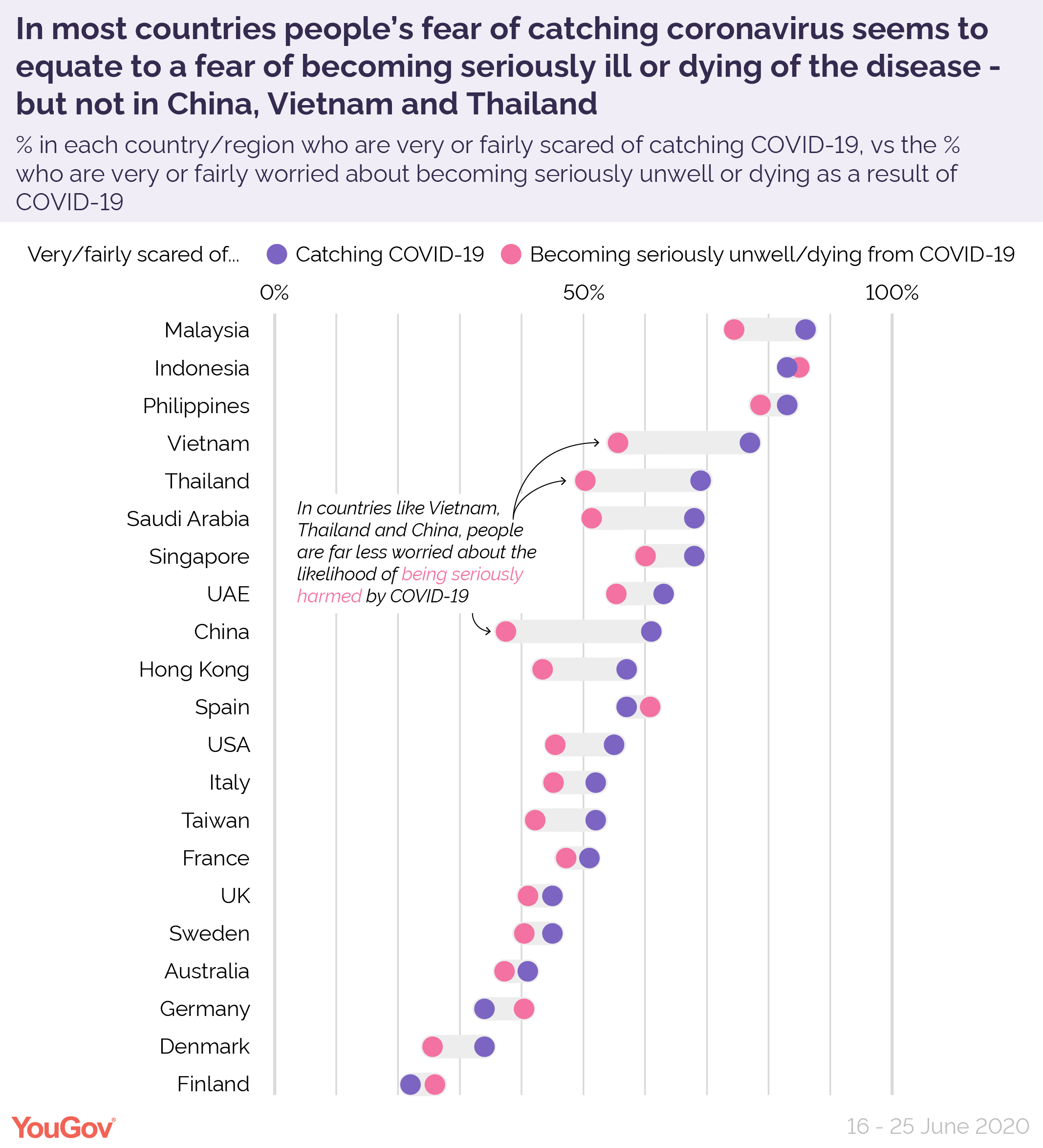 Thai people are similarly less worried about the disease taking a serious toll on their health - only 50% say so compared to the 69% who are afraid of catching the disease in the first place.