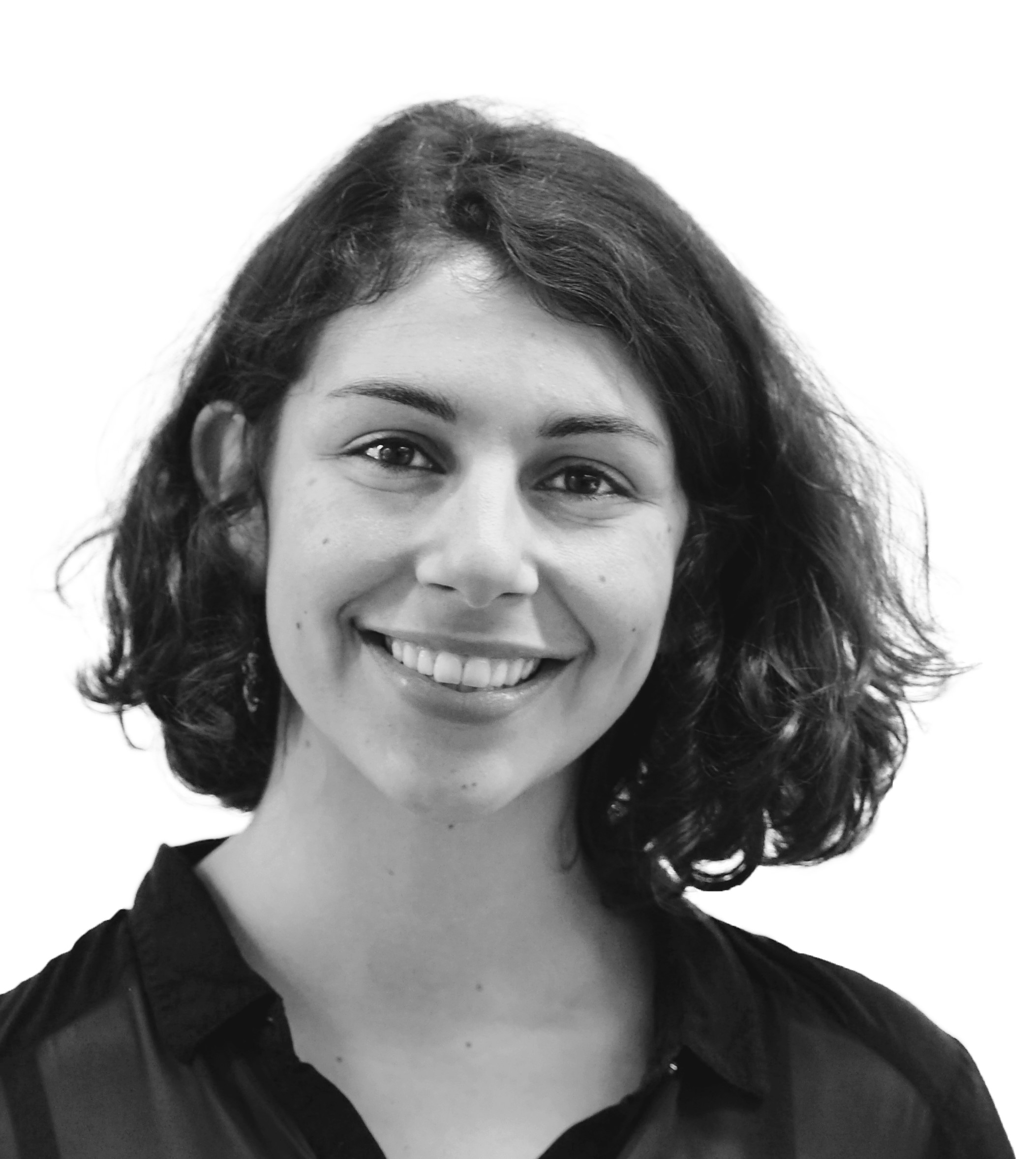 African, Latin American and Asian countries surveyed by the YouGov-Cambridge Centre are generally more likely than Western nations to think China has a positive effect on world affairs. But across all regions surveyed, a plurality would prefer the US as the world’s most powerful force

This year’s annual survey for the YouGov-Cambridge Globalism Project included a number of questions on attitudes to China and the current state of Sino-US relations.

The results demonstrate a divide in attitudes towards China. European countries, the US, and Japan were broadly speaking more critical of China’s influence and leadership, while middle-income countries in Latin America, Asia and Africa were considerably more likely to feel positive.

Nonetheless, a majority in all countries surveyed would prefer to see the United States as the world’s most powerful force in 20 years time – although few think it will be. 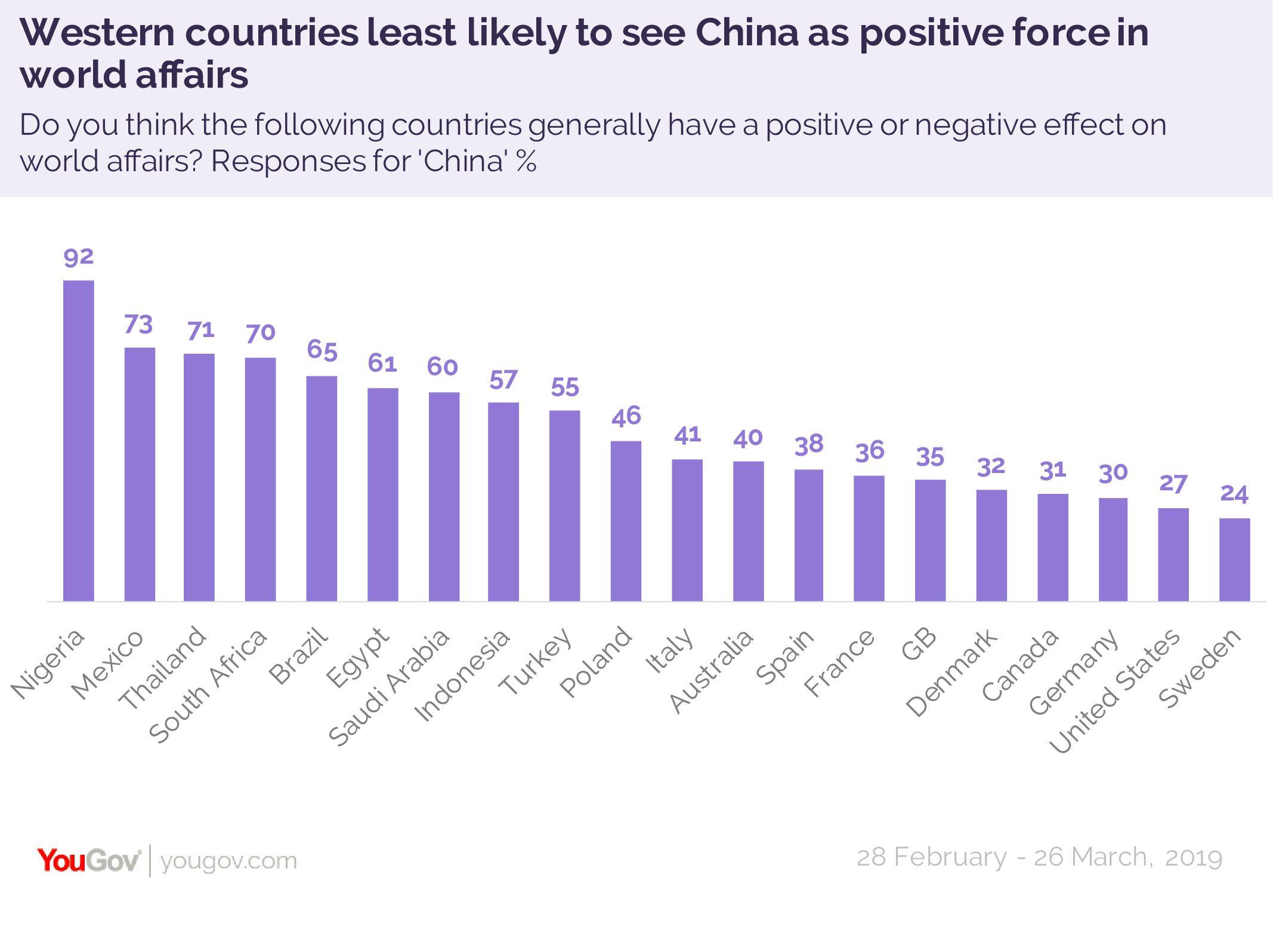 China’s leader, Xi Jinping, is somewhat less well known than the other global leaders asked about – Angela Merkel, Donald Trump and Vladimir Putin. Across all countries surveyed, respondents were most likely to not have an opinion on whether they liked or disliked Xi, or simply not know who he was, than any of the other leaders.

Among those who do know of him, the trend continues of people in Western countries expressing a more sceptical view towards China than those in other regions of the world. People in Western countries are significantly more likely to dislike Xi than like him, with around half of respondents placing themselves between 0 and 3 on a 1-10 scale of how much they like the leader. 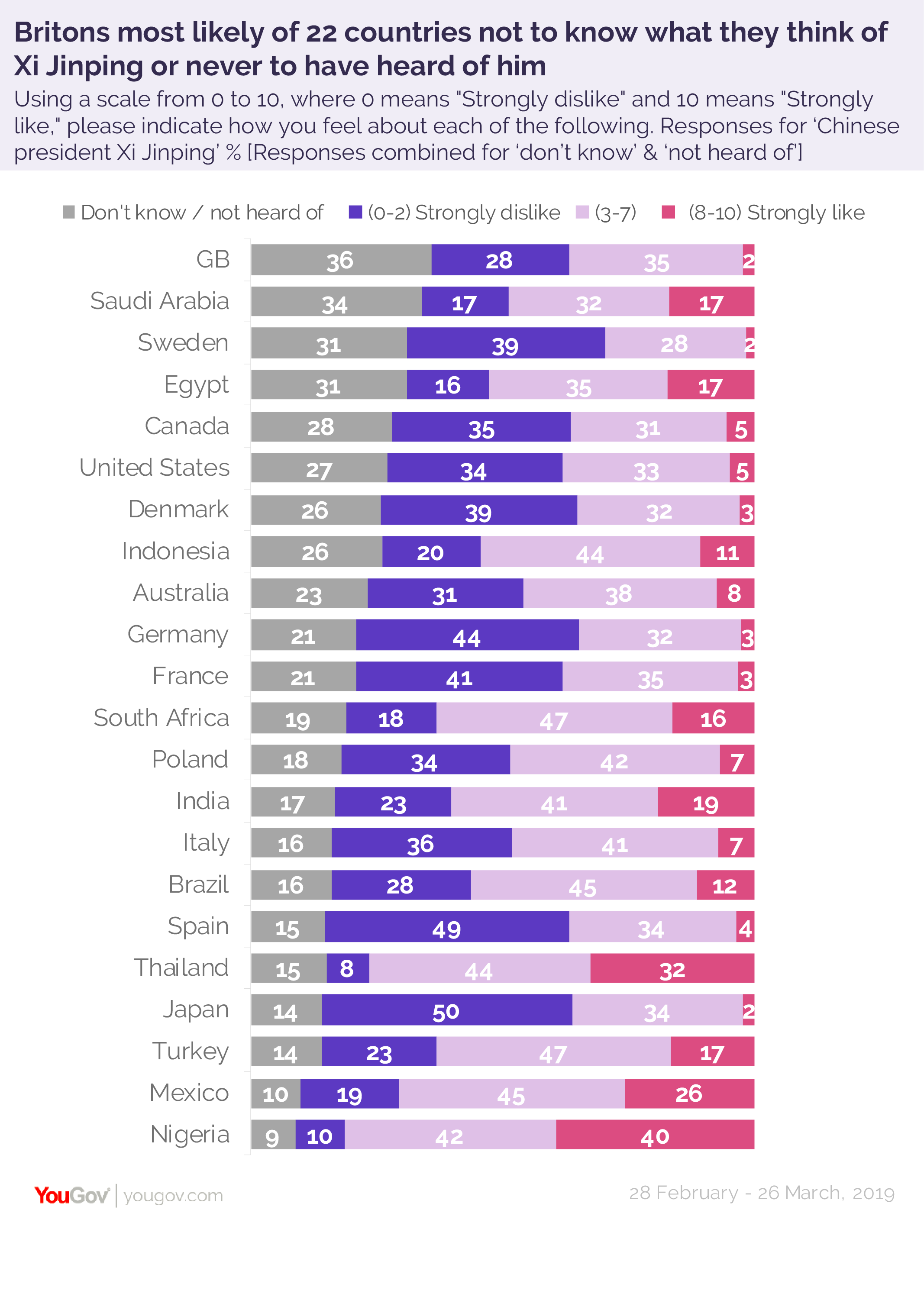 However, in middle income countries like Brazil, Mexico, Turkey, and Egypt, the number of people who dislike Xi falls to between a fifth and a quarter, and the proportion who strongly like him - placing themselves between 8 and 10 on the scale - rises to one in five in India (19%), one in three in Thailand (32%) and a full four in ten in Nigeria (40%).

Who wants China to be the world’s most powerful force?

Despite some countries feeling more positive towards China’s influence than others, a majority in almost all countries would prefer the US to be the most powerful force in world politics over China – but most think China will be. 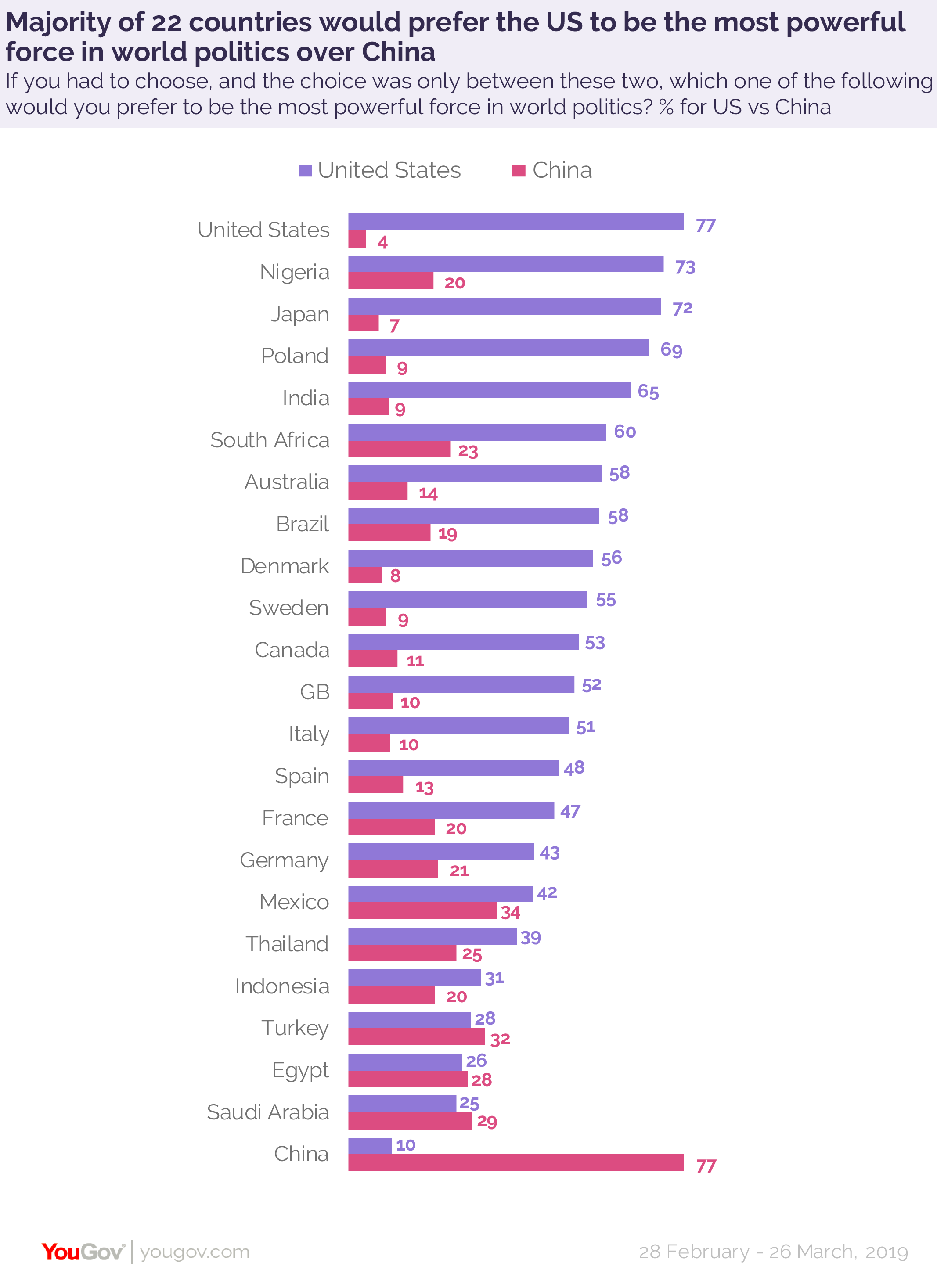 In the UK, younger Britons are considerably more likely than older ones to prefer China over the US as the world’s most powerful force (18% of 18-24s vs 8% of 55+). However, this could be grounded more in anti-US attitudes than pro-China ones: when asked whether they would prefer China or the EU to be the most powerful force, young people are equally as likely as older groups to strongly prefer the EU over China (10% of 18-24s vs 11% of 55+).

One in three Chinese (34%) and one in five Americans (23%) say they think it is ‘likely’ that direct military conflict could break out between the US and China within the next five years. Around half of respondents in both nations think it is unlikely (49% US, 55% China). 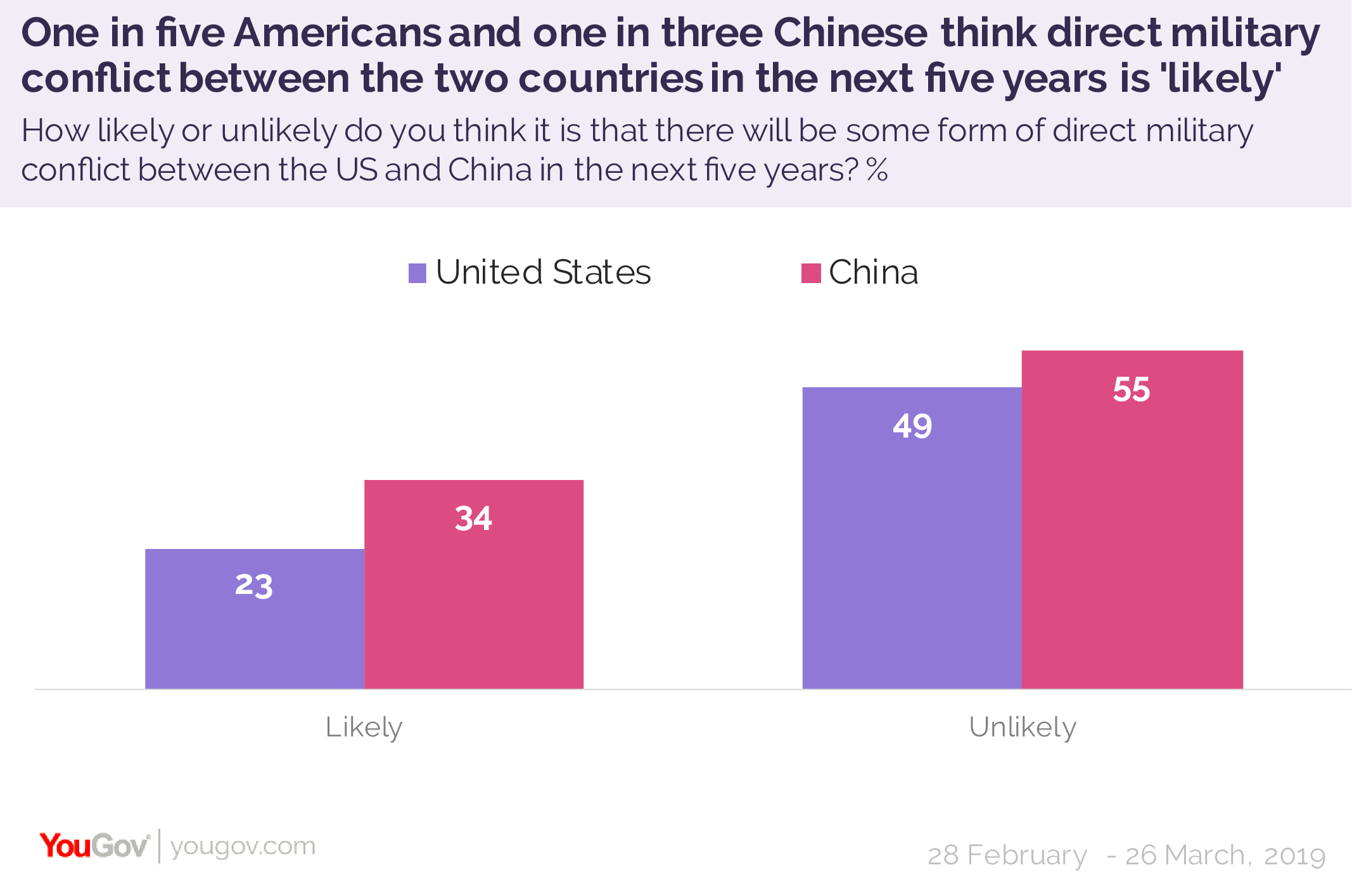 Populations in India, Thailand, and Indonesia are more likely than the Chinese and Americans themselves to believe a war could break out between the two superpowers (48%, 56%, 45% respectively). In European countries, around one in five think direct conflict is likely (18% France, 21% Germany, 22% Sweden, 21% UK).