Romania and Bulgaria's presence in the EU has proved particularly unpopular

Recent YouGov Eurotrack survey data reveals how the borders of the European Union might shift if it were up to the public in key European nations.

We asked the public in six EU member states (Britain, France, Germany, Sweden, Denmark and Finland) whether it was right or wrong to have allowed each of the current members of the EU to have joined, as well as whether countries that are not currently members should be given permission to join if they wanted to do so. 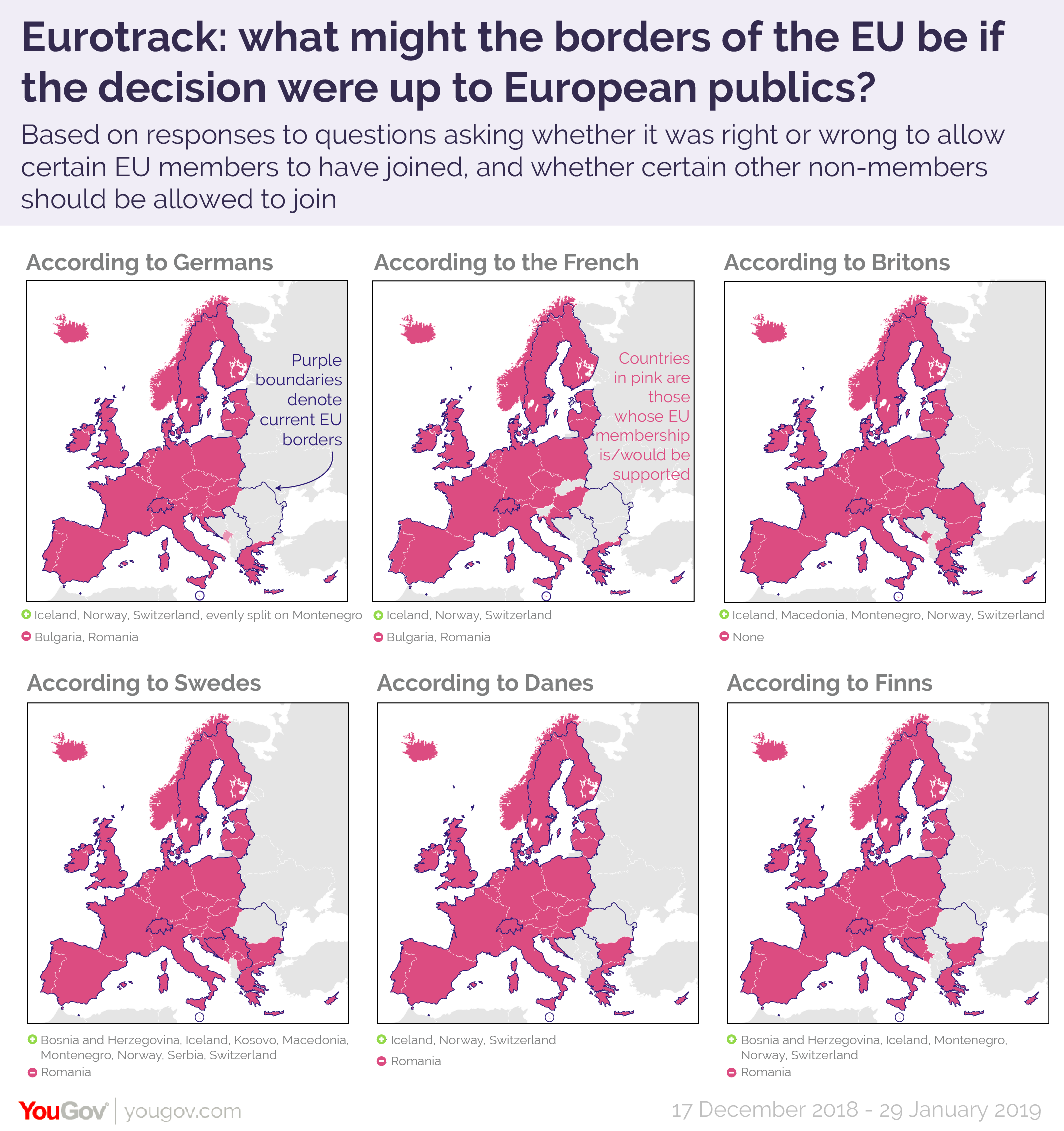 Looking first at those countries that joined in the 2004 enlargement or later shows that the admission of Romania in 2007 has proved particularly unpopular. In Germany, France, Denmark, Sweden and Finland the number of people who think that is was a mistake to allow Romania to join outnumber those that don’t by double digits.

The French and German publics also tend to think Bulgaria should not have been allowed to join, while Danes and Swedes are very evenly split on the wisdom of Bulgarian accession. Finns by contrast tend to be ok with Bulgaria’s membership.

Only in Britain is there a tendency to support both countries’ EU membership (although in the case of Romania it is still fairly weak). 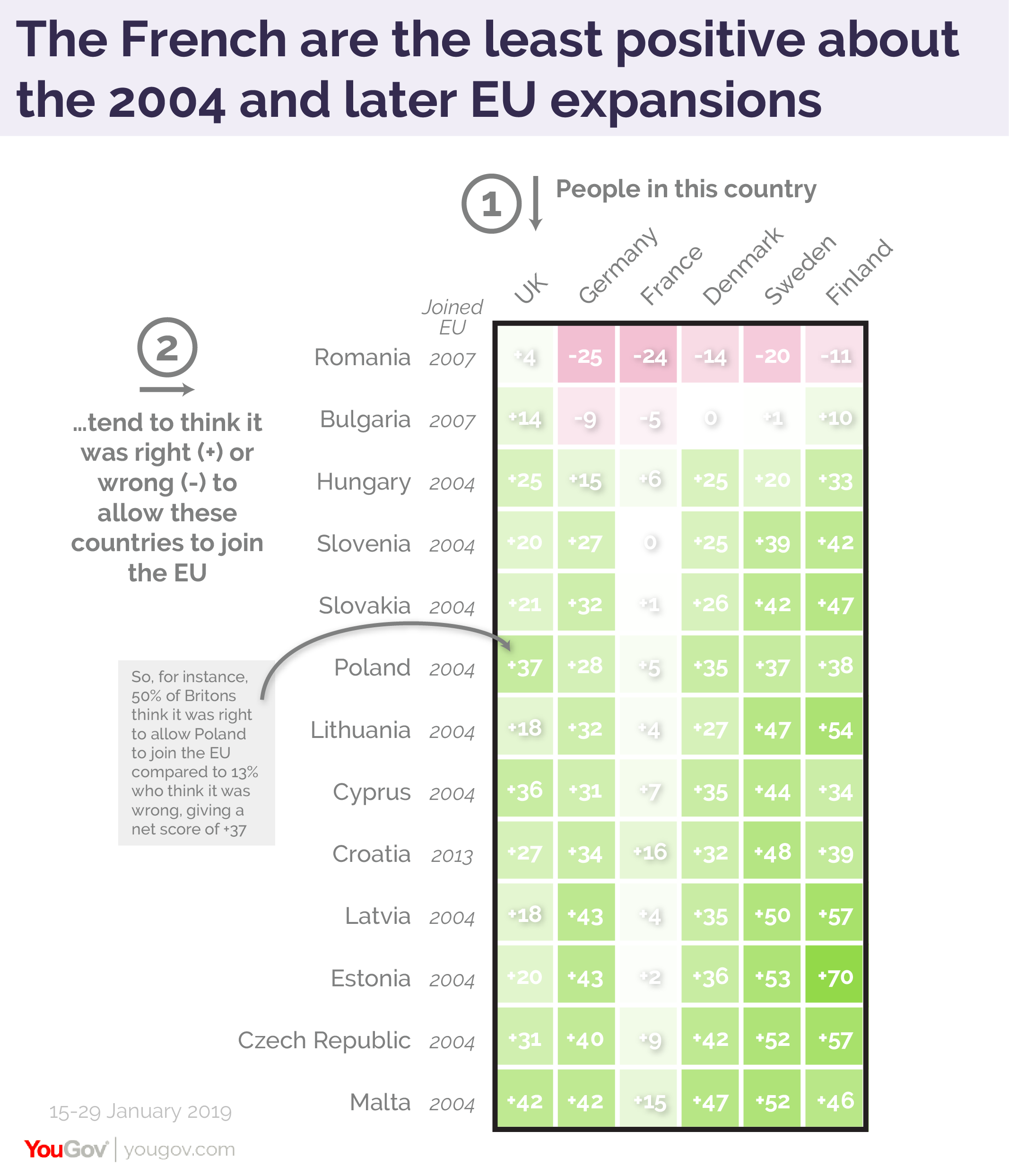 While the entrance of the other 11 countries to have joined since 2004 has been broadly well received, attitudes in France are far more negative across the board, to the extent that French people are evenly split on whether or not it was wrong to admit the Baltic countries, as well as Slovenia and Slovakia. By contrast, in the other five EU countries surveyed support for having allowed these countries to join holds leads from 15 to 70 percentage point leads over opposition.

When it comes to those nations that were members of the EU before the 2004 enlargement the study finds support in every nation asked for these earlier countries' membership. The only country that some waver over is Greece, backing for which is only single digits higher than opposition in France (+8) and Finland (+9).

In terms of countries that are not currently EU members, there is strong support for allowing Iceland, Switzerland and Norway to join (although the same survey found Norwegians clear that they don’t want to, by 63% to 20%). 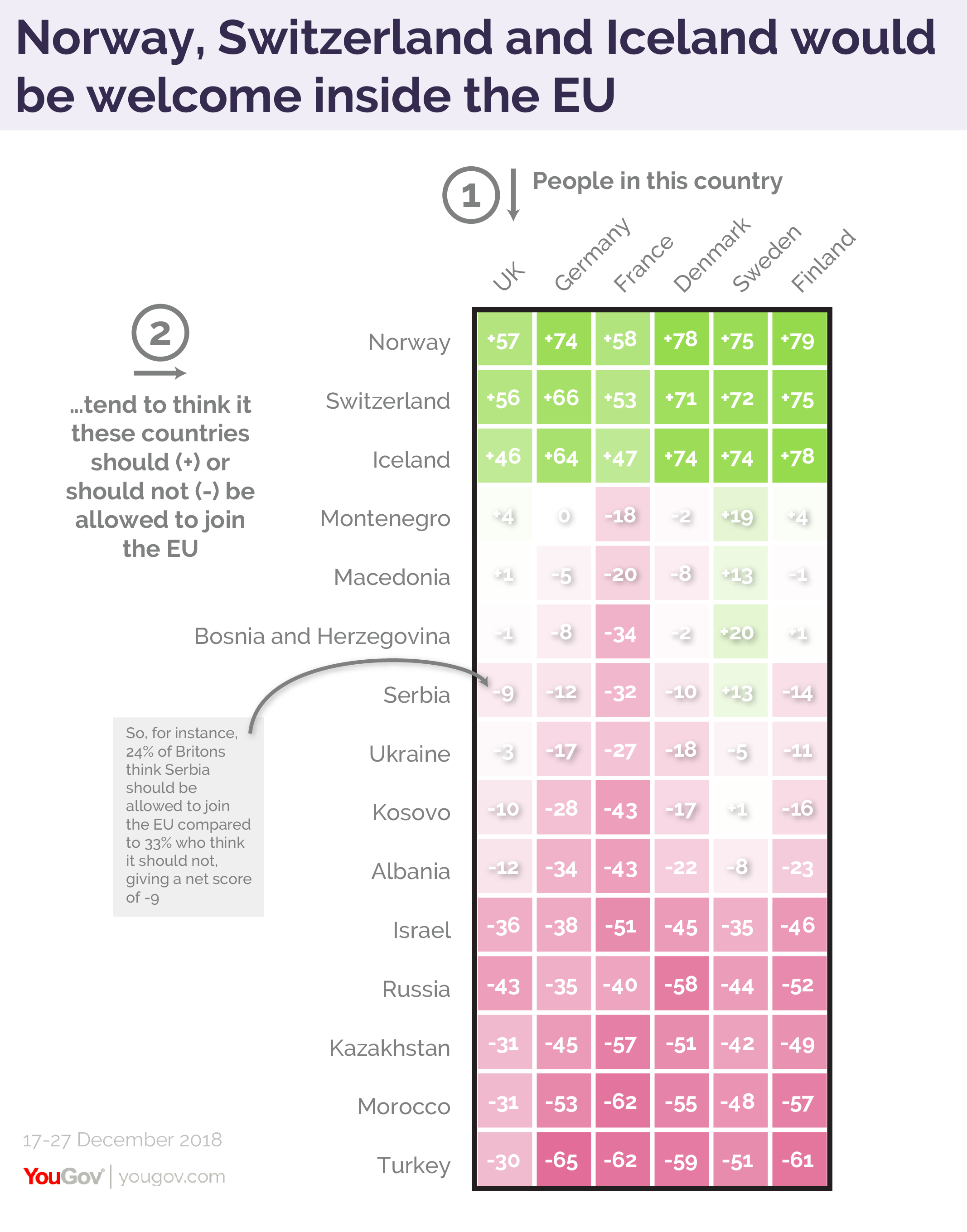 Swedes, Finns and Britons are in favour of allowing Montenegro to join (and Germans are evenly split). Swedes are the most permissive, also backing Serbia, Kosovo, Macedonia (along with Britons) and Bosnia and Herzegovina (along with Finns) being allowed to join.

Turkey, whose membership has long since been teased by the EU, is one of the countries that people are least keen on seeing join, coming bottom in all nations except Britain (where the honour goes to Russia). Aside from these two countries, there is also no overall support in any Eurotrack nation for potential membership for Ukraine, Albania, Israel, Kazakhstan and Morocco.