(This article was fisrt published by The Times here)

We raged at Trump in Britain while we ignore visiting autocrats because we hold America to a different standard.

Did you see the mass protests against that controversial foreign leader? No, I don’t mean President Trump the other week.

I mean President Erdogan of Turkey when he came to London in May, or the Saudi Crown Prince Mohammed bin Salman in March, or the Chinese leader Xi Jinping a few years ago, or even the modern-day tsar of Russia, President Putin, who once came for supper with the Queen.

Actually there were no giant carnivals of protest when they visited. But pick a liberal transgression and at least one of the above regimes is a serial offender on a dystopian scale, be it censorship and stifling dissent, depriving liberty without fair legal process, torture and martial crackdowns, promoting violent social conservatism and discrimination, trashing the environment, stealing sovereign territory or bombarding civilian population centres with indiscriminate force.

As polling shows by the YouGov-Cambridge Centre, conducted just before the Trump visit and published here for Red Box, it is hardly like we hold such regimes in much esteem, compared with America. When these various countries are listed together, a majority of British adults (61%) recognise the US as our most important ally, while virtually no one picks Turkey (0%), Saudi Arabia (2%), China (5%) or Russia (1%). Likewise, most respondents identified America as the most protective of human rights (51%), compared with 2% saying the same for China, Russia or Turkey and 1% for Saudi Arabia. Where a majority of us hold a favourable view of the US (56%), only minorities do so for the others (Turkey-19%/ Saudi Arabia-17%/ China-38%/ Russia-14%). When asked which country among China, Russia and America we would rather be the most powerful force in world politics, roughly half say America (48%), compared with just 8% for China and 3% for Russia. 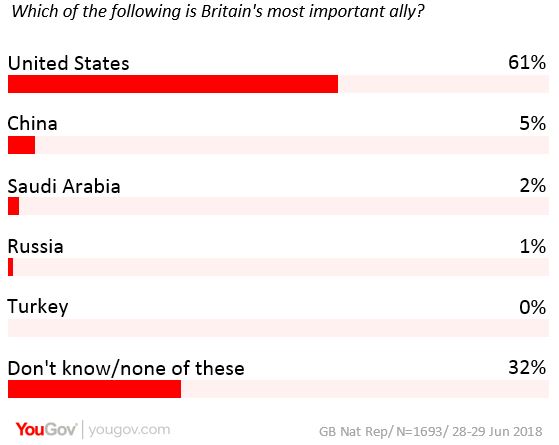 Yet it is Trump’s arrival that sends us to the ramparts, not that of certified autocrats. Separate YouGov polling indicates a predictable gulf between sentiment towards Trump and the country he leads, with barely one in five British adults favourable to the President. But we are normally perfectly willing to tolerate visits from powerful leaders who represent an uncomfortably different value-system from our own. We might dislike their actions and even wish to say as much when they arrive. Still rarely do we collectively proclaim they are not even welcome to visit. When it comes to the democratically elected leader of an enormously important Western ally, however, we suddenly have politicians, mayors and scores of the public applying a different standard.

Which is precisely the point. Beyond the usual scatter of Islington revolutionaries, what galvanised mass resistance to the Trump visit was paradoxically the enduring acceptance of American Exceptionalism. When Trump makes sexist remarks, or bans migrants from Muslim countries, or separates parents from children, or wades into British politics, or builds a wall between countries, or starts a trade war, or sucks up to Putin, or scorns multilateralism, it all stirs a unique indignation because it quells a unique expectation of America to lead by example as the superlative superpower.

This is why you can commit all manner of sins against your own people or the global order and still be welcome here as a foreign leader, even a very powerful one, as long as you’re not the single, most powerful one on earth. Because then, as the polling intimates, a different type of sensibility rises up from the public subconscious, conceding that America remains uniquely influential in a world that still needs its leadership as a better alternative to none at all or being replaced by a country like China.

So Trump should take it all as one big compliment but also one big criticism above the rest, namely behaviour unbecoming of a truly exceptional leader.