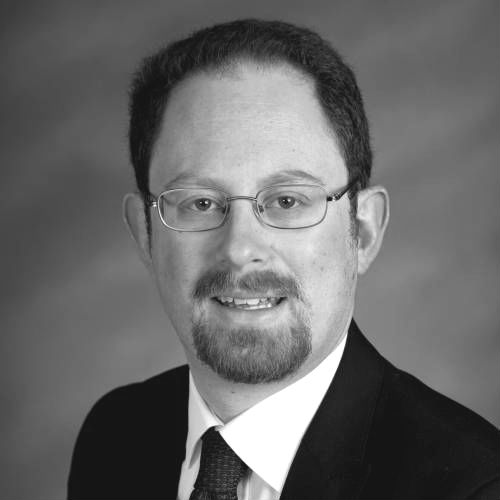 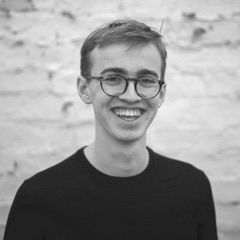 As polling for the Jesus College Intellectual Forum suggests, voters give limited credence to crude portrayals of generational difference.

From snowflakes to greedy pensioners, age-based stereotypes have seemingly hardened in recent years, while concerns about a generation gap in attitudes and living standards appear to be on the rise, echoing the ‘birth of the teenager’ in the 1960s.

In support of the Rustat Conference on Intergenerationality, the YouGov-Cambridge Centre recently collaborated with the Jesus College Intellectual Forum to survey a representative sample of the British public on generational perceptions.

As results suggest, voters see a gap but not a gulf between the fates of young and older cohorts over recent decades, and are more likely to reject age-based clichés than endorse them.

Respondents were asked about two age groups in particular –‘18-35’ and ‘65 and over’ – and whether they thought life had got better or worse for each over the past 40 years, in terms of living standards, mental health and political influence.

Predictably, we find strong belief in a baby boomer’s dividend, with 63% of all respondents saying older people enjoy better living standards now than 40 years ago. This view has majority support across the age range, including notably 76% of those currently in that age group.

Fewer say the same for younger adults – but not dramatically so. Nearly half of respondents overall (48%) still believe living standards for 18-35s have improved over the same period, compared with 35% saying the opposite. Interestingly, these attitudes are essentially mirrored by those of current young adults themselves, with 47% of those aged 18-24 saying ‘better’, compared 35% saying ‘worse’. 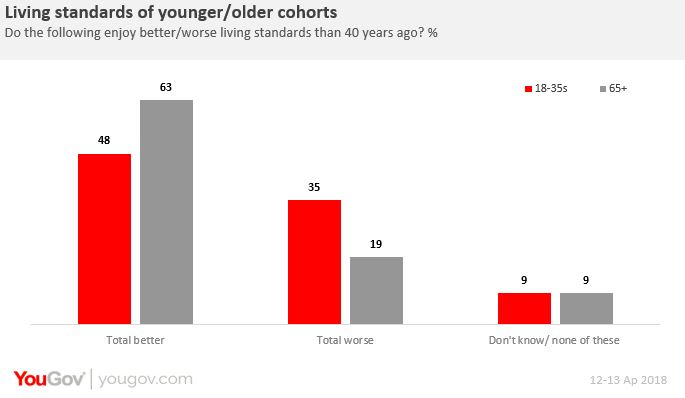 We find more similarities between age groups on the subject of political influence, with pluralities suggesting both age categories have gained in this respect. A slightly higher percentage of both young and senior adults think 18-35s have increased their political voice (46% among 18-24s and 44% among 65+ respectively), which may be linked to mutual perceptions of digital youth empowerment.

There is a considerable gap, however, regarding perceptions of mental health, with 66% overall saying 18-35s are more likely to suffer mental health problems than in the past, compared with 35% saying the same for the 65+. Again, we find little variance across the age range of respondents. 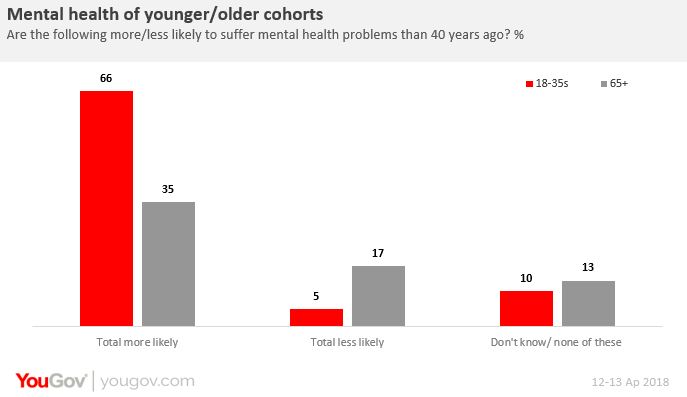 Findings yield positive news, meanwhile, for those who begrudge the talk of generational labels and personality traits. Respondents were shown a list of epithets spanning the past 90 years and asked which one, if any, best described their own generation, including ‘Silent Generation’, ‘Baby Boomers’, ‘Millennials’, ‘Generation X’ and ‘Generation Z’. A 50% majority chose ‘Don’t know/none of these’, suggesting they did not identify with any of the labels, while the largest portions who did embrace one were 22% for baby boomers and 12% for millennials.

By a similar token, people were asked specifically what positive or negative characteristics they might associate with millennials and baby boomers, choosing up to four from a list of twelve.

Here again, the largest portion of respondents in each case selected ‘Don’t know/none of these’ - 39% for millennials and 40% for baby boomers respectively. Among those who did pick from the list, we admittedly see some familiar portrayals. The most common answers overall for millennials are “easily offended” (30%), “selfish” (25%) and “lazy” (22%), while the top ones for baby boomers are “hard working” (36%), “fortunate” (29%) and “socially responsible” (22%). In terms of how youngest and oldest cohorts perceive each group, the 65+ generally reflect national trends on both counts, while respondents aged 18-24 are most likely to define millennials as “open-minded” (37%) and to see baby boomers as “narrow-minded” (28%). But still the larger portion of both youngest and oldest brackets tend to choose ‘Don’t know/none of these’ when asked to define each other. 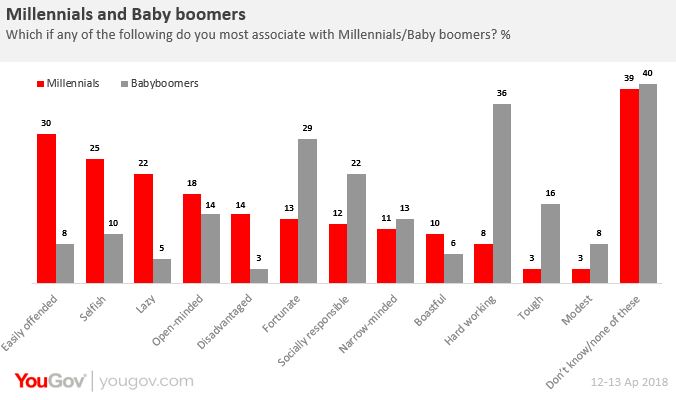 In the bigger picture, we seem to be living through an age of intensifying identity-politics, a trend surely amplified by journalists, politicians and pollsters in their urge to summarise and segment the public mind. But while popular discourse increasingly agitates against sweeping generalisations about gender and other forms of identity, so it appears to embrace them when it comes to age. This only fuels a broader atmosphere in which crude appeals to generational difference are becoming all too common in British politics, from arguably cynical pensioner bungs to divisive Momentum campaigns.

Perhaps an important message in these results, therefore, is that a significant portion of the British public looks unwilling to endorse the most popular cohort parodies. In which case, they might welcome a more inclusive approach to public policy, aimed at what causes the differing fate of generations, rather than stoking the political rivalry between them.

Methodology: YouGov-Cambridge fieldwork was conducted online between 12–13 April, 2018, with a total sample of 1640 British adults. The data have been weighted and results are representative of all British adults aged 18 or over.