A close race in Florida? No surprise. An equally close race in Texas? That’s 2016, according to the latest wave of the YouGov/CBS News 2016 Battleground Tracker.

Among likely voters in Florida, Clinton receives 46% support, with 43% backing Trump. Both candidates are at their highest levels of support recorded since the Battleground Tracker first polled Florida general election voters in May, as undecideds and third party supporters have moved gradually towards the major party candidates. 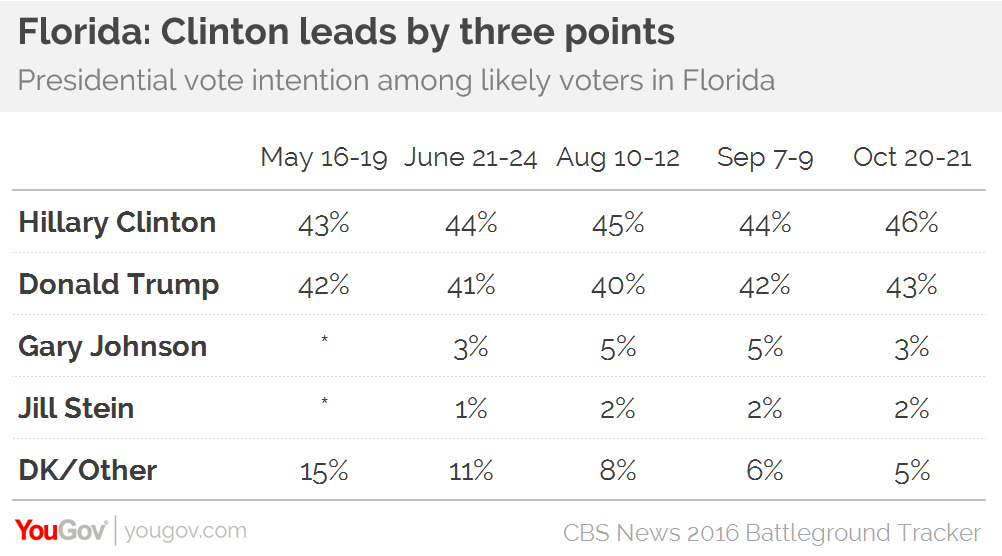 Both polls were conducted October 20th-21st, after the third and final presidential debate, which was held in Las Vegas, Nevada on October 19th.

In a recurring theme of the election so far, Clinton fares better among Democrats (91% support) in Florida than Trump does among Republicans (82%). The gap is even wider when it comes to the question of how many partisan voters are “glad” about their party’s choice of nominee: while 74% of Democrats say they are satisfied the party nominated Clinton “no matter what happens in November”, only 52% of Florida Republicans can say the same for Trump. Asked how they would vote in a re-run of the 2016 GOP primary, only 35% of Republicans pick Trump, though his opposition is divided, much as it was when he won the state's primary in March with 46% support. 25% would pick Florida’s junior senator, Marco Rubio – who is running for re-election himself this year – while 18% opt for Ted Cruz. Jeb Bush and John Kasich each get only single-digit support.

Republican dissatisfaction also seems to be hobbling the Trump campaign in traditionally deep-red Texas, where it’s Trump with a narrow, three-point lead, 46% to Clinton’s 43%. Barack Obama lost the state by 12 points in 2008 and 16 points in 2012. 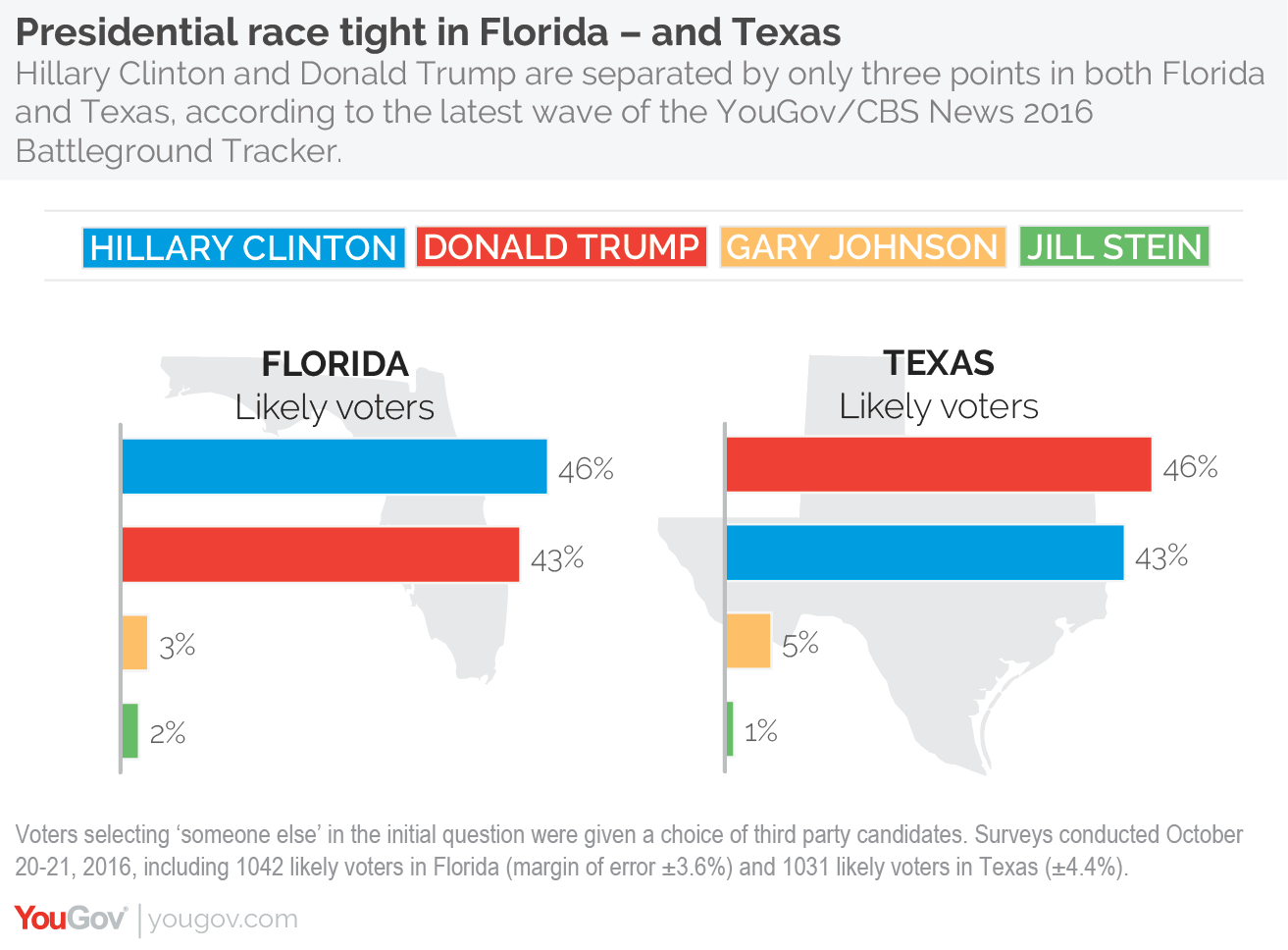 Notably, Clinton’s level of support is similar to Obama’s in 2008 across racial groups and party identifiers. What’s different is Trump is trailing McCain’s support among whites and Republicans in Texas by around 10 points each. The voters Trump has lost either say they are undecided or back Libertarian candidate Gary Johnson, who served as governor of neighboring New Mexico when he was still a Republican. Of course, if these voters ultimately “come home” to the Republican nominee, Trump could be safer than he looks now.

But Texas is also a changing state. According to exit polls, Obama won Texans aged 18-29 by 9 points in 2008, and lost all other age groups (no exit poll was conducted in Texas in 2012). Eight years later, according to the Battleground Tracker, Clinton is winning 18-29 year olds by 21 points, and winning 30-44 year olds by eight. Hispanics also make up a larger share of the electorate than eight years ago, and Trump is doing no better than McCain with this group.

Trump’s problems in the Lone Star state resemble those seen elsewhere. Only 40% say he is prepared to be Commander-in-Chief, compared to 51% who say so for Hillary Clinton. Voters are also more likely to say Clinton has good temperament and judgment, by a margin of 16 points. Only 35% think Trump respects women and 54% say he has not explained his past comments about women. That’s not to say Texans have gone all-in on Clinton: just 38% say she could fix the economy, versus 50% for Trump, only 33% think she has explained her “past comments in emails”, and 70% say she is not honest and trustworthy. Voters in Texas also tend to be supportive of one of Trump’s signature policy ideas, the border wall. 56% think the wall is a good idea. However, only 36% think it can probably be completed.

So far, Hillary Clinton’s narrow lead in Florida looks like it may not come with coattails long enough to make Democratic Congressman Patrick Murphy a US Senator. Among likely voters in Florida, Sen. Marco Rubio leads Murphy by two points, 44% to 42%. Rubio benefits from slightly greater Republican support than Trump – 86% back him – and also greater support among Hispanics, who split 40% for Rubio to 40% for Murphy in the Senate race.

Interviews were conducted October 20-21, 2016 for the CBS News 2016 Battleground Tracker. A detailed description of the methodology used to carry out the surveys can be found here.

See additional questions and demographic breakdowns for Florida and Texas.