Six in ten Germans now say Greece should leave the Eurozone, up from 48% a month ago

Relations between Germany and Greece continue to deteriorate. As Greek Finance Minister Yanis Varoufakis arrived in Berlin on Monday he was battling accusations that he "gave the finger" to Germany during a 2013 speech. Last week, German Finance Minister Wolfgang Schaeuble broke ranks with Chancellor Angela Merkel to warn that Greece could be headed for an "accidental Grexit" – an exit from the Eurozone – if the bailout talks fail. 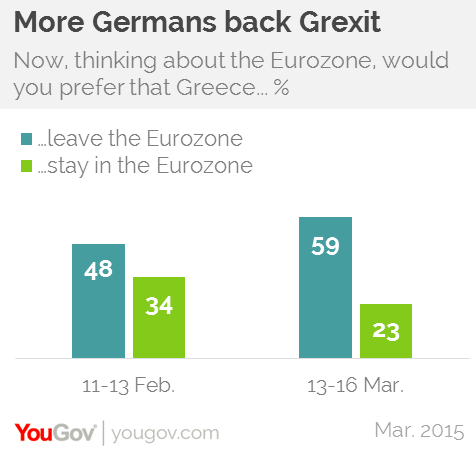 The German population may be getting tired of the back-and-forth, finds a new YouGov survey. 59% now say they would prefer for Greece to leave the Eurozone. Less than a quarter (23%) favour keeping them in the 19-member monetary union.

A YouGov poll four weeks ago already found that Germans leaned towards Grexit, but the margin was narrower. At that time, 48% of Germans favoured a Greek exit from the Eurozone, and 34% were against it.

Proponents of a Greek exit now outnumber opponents in all age and political groups in Germany.

Four weeks ago, supporters of the centre-left SPD and more left-wing parties like the Greens and Die Linke opposed Grexit. Now all three groups tend to support it. Particularly dramatic is the shift among SPD supporters. In February 42% of Social Democratic voters wanted a Grexit and 47% opposed it, but today there are more than three-fifths (62%) in favour.

A version of this article was originally published in German at YouGov.de